The Arabic chat language, known as “Arabizi”, is a casual version of written Arabic that was born when Arabic speakers began using Western keyboards to spell out their native language with the Roman alphabet. With the growth of digital communication, Arabizi has become one of the most proliferate online languages. With as many as 420 million speakers in the world, Arabic coverage, and by extension, Arabizi, is necessary for any global text analytics system.

Rosette API converts all Arabizi variations to the correct modern Arabic word, minimizing information loss and ensuring consistency across translations. Its a linguistic algorithm looks at the frequency of the structural components of each word together with a statistical model trained on the input of millions of Internet users from all over the Arabic-speaking world. It can also transliterate standard Arabic into Arabizi.

In order to process the huge volumes of Arabizi text being created, it must first be converted to the long-form, Modern Standard Arabic (MSA). After Arabizi text has been transliterated to Arabic, it can be run through other forms of linguistic analysis, such as morphology, entity extraction, and sentiment analysis.

This dual algorithmic and statistical approach is increasingly recognized as the most effective method for text analysis and machine translation. Our technology is the only commercially available product offering these features in the realm of Arabic transliteration. RCT is designed for performance and concurrency from the ground up. It is capable of transliterating thousands of words per second, enabling your applications to instantly convert textual input and quickly process large databases of text. Available both as a Java class library and as a web service, the functionality can be integrated into almost any software environment.

Unlike machine translation systems which rely on conventional dictionaries, RCT is powered by a database of 300 million Arabic words collected from thousands of different websites. This approach enables translation which reflects contemporary usage throughout the various regional Arabic-speaking online communities. Our database subscription service enables the translation engine to remain current with the latest trends in terminology and personalities.

Built for the most demanding text analytics applications and engineered to deliver high accuracy without sacrificing speed, Rosette Cloud is instantly accessible and offers a variety of plans to suit both startups and enterprises.

Try transliteration and the rest of Rosette’s endpoints, signup today for a 30-day free trial!

Get a Rosette Cloud Key

Customers love our thorough and responsive support team. We also provide in-depth documentation that lists all the features and functions of the various endpoints along-side examples in the binding of your choice.

Visit our GitHub for bindings and documentation.

Evaluate Rosette’s functional fit with your business and data needs in the cloud knowing that scalable, customizable, enterprise deployments are available if you need them.

Customize and scale your text analytics on premise

For organizations with vast data quantities, unique integration needs, and data security restrictions, we provide on-premise deployments to be hosted on your internal servers.

If your organization requires an enterprise solution, we’re happy to work with you to meet your business’ unique needs. For free evaluation of Rosette Enterprise please complete the form below and our Customer Engineering team will provide you with an evaluation package.

Drop Us a Line

KonaSearch is a best-in-class search application for SalesForce enabling users to search every field, file, and object across multiple orgs and other data sources. 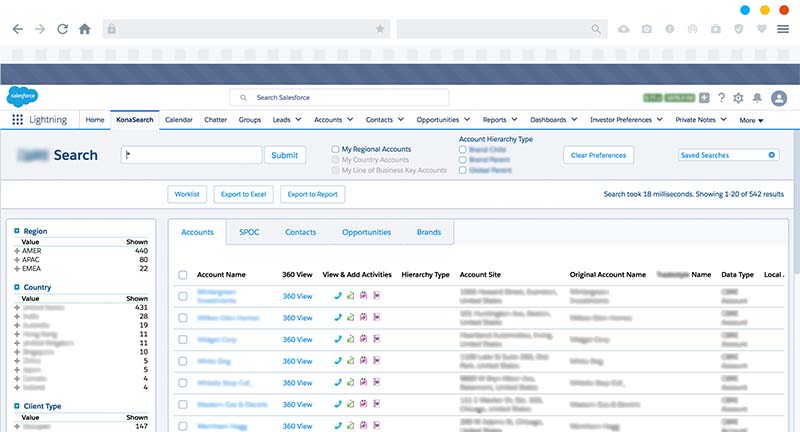